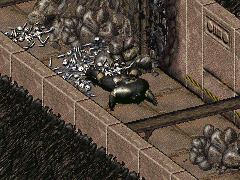 “The monsters are swarming up the mineshafts. All efforts to delay them have failed. We'll try to hold them at this position as long as we can.”

Captain Pickard was an Enclave officer, securing the excavation at the Mariposa Military Base. He was the last person to remain inside the base along with some of his soldiers, buying the rest of his unit time to seal the entrance into the base.

Pickard's name is likely a reference to Captain Jean-Luc Picard, played by Patrick Stewart in Star Trek: The Next Generation.

Retrieved from "https://fallout.fandom.com/wiki/Pickard?oldid=3144415"
Community content is available under CC-BY-SA unless otherwise noted.