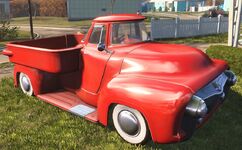 The Pick-R-Up is a vehicle appearing in the Commonwealth and Appalachia.

A small truck with a flatbed compartment in the rear and low suspension, remnants of Pick-R-Up trucks in various colors dot the post-War landscape. Described as "the mainstay of hardworking tradesfolk" before the Great War, the utility vehicle has a V8 engine diesel-fusion engine, large bed, and allows for a single occupant in the cab.[1] Variants include those outfitted with a hook mechanism present for towing. On billboards throughout the Commonwealth, the advertising catchphrase "Ain't No Load She Can't Haul" can be seen.

There are 266 Pick-R-Ups in Appalachia, in locations such as:

A 1:18 scale model of the Pick-R-Up was produced by the Wand Company, created in three different designs.[1]

The Pick-R-Up appears only in Fallout 4 and Fallout 76.

The Pick-R-Up has a typical 50s design which resembles the Ford F-series manufactured between 1953 and 1956.

On the overpass above Fiddler's Green Trailer Estates

Rear view of a wrecked Pick-R-Up

In the driveway of the hillside home

Body of a pastor at the Morgantown Airport

In front of Portside Pub

Modified truck at the Rusty Pick

Retrieved from "https://fallout.fandom.com/wiki/Pick-R-Up?oldid=3421442"
Community content is available under CC-BY-SA unless otherwise noted.