Pi House is an unmarked location in the Forest region of Appalachia, along Morgantown's Fraternity Row. It is next to Morgantown High School.

Pi House once belonged to Pi Kappa Mu Greek Society, or "Pi Mus," a fraternity at Vault-Tec University known for its frequent parties. These events, and infractions therein, resulted in the Pi Mus' eviction on October 20, 2077. Members of the society were friends with those of the Eta Psi Epsilon Tau Greek society due to their collaboration on the Nukashine project.

When Pi Kappa Mu received the eviction note, they decided to hold a "Wild Eviction Party," an event that caused the deaths of several guests due to Nukashine poisoning. During that night, two individuals, Max Posey and another pledge were sent on a trek to become Pi Mus. They were handcuffed to a pipe and locked away in the laundry room. When everybody outside started feeling the side effects of the Nukashine, they were still conscious. At some point, the unnamed pledge tried to use a saw to escape the handcuffs, subsequently recording a holotape telling his story. In the holotape, he mentions that he had chosen not to drink the Nukashine, whereas Max did. The remains of both of the initiates can be found in the laundry room.

The house is comprised of three floors. The first floor consists of the entrance, a kitchen, and a living room with a pool table. The basement is comprised of a large room used for parties, a fairly big bathroom and a washing machine room turned into a pledges' room. On the second floor are the bedrooms with a total of three rooms and seven beds.

Pi House appears only in Fallout 76, introduced in the Wild Appalachia update.

Skeleton in the bathroom

Ted's terminal and a glowing bottle of Nukashine 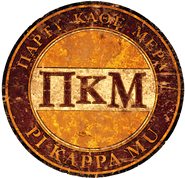