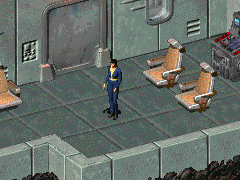 “Oh my, you are hurt, aren't you? I'm sorry, I should have been paying more attention. Go see Dr. Troy. He'll take care of you.”

Born in 2216,[1] Phyllis is an attractive woman with a lithe figure and the ever-present, faint aroma of antiseptic about her.[2] She is a competent nurse, working with Dr. Troy in Vault 8 to keep the citizens healthy and strong. She is a natural Vault City citizen, though unlike her peers, she finds the pressure to conform disconcerting. To her, the vast majority of Vault City dwellers act like clones, dressing the same and harboring the same beliefs. The fact that the vast majority of activities is geared towards octogenarians doesn't help.[1]

While Phyllis is a dull and self-centered person in private, she displays a natural curiosity many other citizens have suppressed within. This trait mans that someone with the right approach can successfully convince her to broaden her horizons and seek out the outside world, even if it's just the merchants in the Courtyard.

Retrieved from "https://fallout.fandom.com/wiki/Phyllis?oldid=3405372"
Community content is available under CC-BY-SA unless otherwise noted.