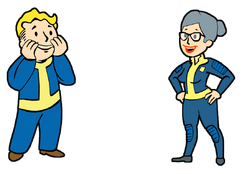 Daily: Photo Opportunity is a daily quest in the Fallout 76 update Wastelanders.

This quest is given by Davenport, the Mister Handy assistant of the Vault 76 overseer. He asks the vault dwellers to do some reconnaissance work of the Settlers and Raiders for him, that being to take some photos and return them to him. The vault dwellers can choose either Foundation or the Crater to do recon on. Davenport will then send them to take photos of two targets in the area of that location, usually one in the settlement itself, and one nearby.

Once the photos are taken, two options are available based on the location selected: Return the photos to Davenport for a reward of caps and camera film, or take them to a representative of the opposing faction for both a reward and boost in reputation with that faction, with a follow-up report back to Davenport (having Charisma 8+ will give an option to lie to Davenport and still receive a caps reward from him). Either way, speaking with Davenport completes the quest and gives a reward of three Treasury Notes.

Retrieved from "https://fallout.fandom.com/wiki/Photo_Opportunity?oldid=3496681"
Community content is available under CC-BY-SA unless otherwise noted.