Fallout 76
“Today I'd like to tell you about Philippi's Battlefield Cemetery, where the first land battle of the Civil War took place.”— Dick Shale, Appalachia landmarks - Philippi's Cemetery Battlefield

Philippi Battlefield Cemetery is a location in the Toxic Valley region of Appalachia.

On June 3, 1861, the first organized land action of the American Civil War took place in Philippi, West Virginia where the cemetery now stands, forming part of the Western Virginia campaign of the Civil War. The Union were victorious.[1]

The Philippi Battlefield Cemetery is a Civil War museum commemorating the Battle of Philippi. It consists of the cemetery itself, a small museum building and a large parking lot. As expected, the cemetery contains many graves, and aster grows throughout the area. A large stone monument sits in the center of the cemetery beside an audio tour station and six historical cannons are pointed west towards Toxic Valley.

The museum is north of the cemetery. It has a Nuka-Cola machine outside, next to a pew by the front door. The museum foyer contains a long counter with a cash register on top. Behind the counter are two footlockers, a locked (Picklock 0) first aid and several display cases containing relics from the Civil War. The display cases can be accessed by pressing the red button on the wall. There are more display cases and relics upstairs.

The bottom floor of the museum contains yet more display cases, a Port-A-Diner, and a door leading out back towards the parking lot. The parking lot houses an angry yao guai who will attack on sight. There are also two port-a-potties, one of which has a stalk of wild corn growing in it.

Most of the gravestones and obelisks used to be destructible. Only one grave and the monument remain so. 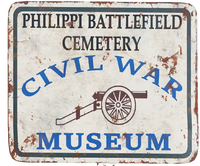