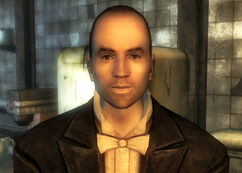 “I'm the fucking god of New Vegas brahmin fusion cuisine, that's who. No, no, that doesn't even give me the credit I deserve. I fucking invented edible food.”

Philippe is a White Glove Society member and head chef living at the Ultra-Luxe in 2281.

Philippe is the resident chef of the Ultra-Luxe casino. Like most of the members of the White Glove Society, he is obsessed with striving for "superior cuisine."

When Philippe was five, his father left the family, which led his mother, a "chem fiend" to "bring home a series of strange men who insisted upon him calling them 'Uncle.'" His sisters also would lock him in a shipping crate whenever they did not want him around. There seems to be a terrible incident in Philippe's past involving his brother, which only partially resurfaces after the player character suggests that Philippe's aggressive attitude is not due to his "just liking to shout at people," as he claims, but rather the severely traumatic experiences of his childhood.

Philippe has made a habit of being intensely abusive to his subordinates, shouting and cursing at anyone who ranks beneath him in the cooking staff hierarchy- which is everyone. He insists "they deserve it" and that he likes shouting at them. He even assumes the Courier is one of his waiters if he/she makes a visit to the kitchens, allowing the Courier to witness his abusiveness firsthand. Striving for perfection in his cooking and total dominance over his staff are Philippe's dual goals, both a response to the childhood trauma he has tried so hard to suppress.

Beyond the Beef: Philippe is preparing the meal for the gala event later. He had been experimenting with making imitation strange meat pie and has finally got it right. Alternatively, you can have him cook Carlyle St. Clair III instead of Ted Gunderson.

Retrieved from "https://fallout.fandom.com/wiki/Philippe?oldid=3338144"
Community content is available under CC-BY-SA unless otherwise noted.