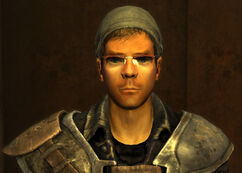 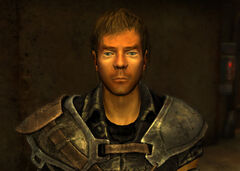 Philip without the headwear

“Cooke is just an overambitious prick, and he's going to get us all killed.”

Philip Lem made his living by sneaking into NCR camps and stealing goods and made a well enough living. One day, however, he got sloppy and got caught, avoided hanging, and sent to New California Republic Correctional Facility.[1] Once there, Lem was one of the first inmates involved with Samuel Cooke's prison break plan and took part by spreading the word to other useful inmates and eventually participated in the NCRCF prison break, like the other inmates.[2]

Lem decided to follow Cooke's lead on the way out of NCRCF and to Vault 19 but after all was said and done, Lem began to think that the group should turn themselves in back to the NCR believing that the group can't sustain themselves on the limited resources they got[3] and Cooke's overambitious agenda against the NCR will eventually just get them all killed.[4] Currently, Lem is at odds with Cooke on who wants everyone to stay while Lem and his group want to leave and surrender to the NCR, leaving the group confused on who's actually leading.[5]

Why Can't We Be Friends?: After planting the C-4 on the microcline rock, Philip asks the Courier to talk to Papa Khan to secure their alliance.

Phillip Lem's name is derived from the science-fiction writers Phillip K. Dick and Stanisław Lem. Sydney Wolfram, who designed Vault 19, was reading from both authors at the time.[6]

Retrieved from "https://fallout.fandom.com/wiki/Philip_Lem?oldid=3247085"
Community content is available under CC-BY-SA unless otherwise noted.