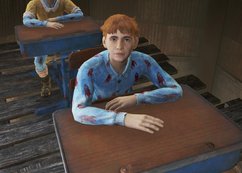 Phil Wallace is a child living in Diamond City in 2287.

He is one of the children living in Diamond City. During the day he attends the school run by Mister Zwicky and his robot, Miss Edna. He is imaginative and particularly enjoys creating short stories, he is rather proud of his latest work about a super mutant named Joe. Unfortunately this is what he handed in as an assignment about wasteland creatures, and should have been non-fiction. This misinterpretation of the subject matter doesn't deter him though, he already has a sequel in mind in which Joe grows an argumentative second head. Furthermore, he has another idea in which Joe faces off with a notably tough mirelurk, this chapter would be titled "Super Mutant Joe versus The Fish King."

Phil Wallace appears only in Fallout 4.

Retrieved from "https://fallout.fandom.com/wiki/Phil_Wallace?oldid=3450320"
Community content is available under CC-BY-SA unless otherwise noted.