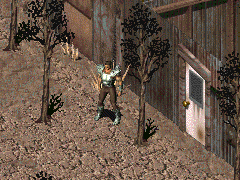 “I should shoot you dead, but I'm kind of curious about what you could possibly have to say to me.”

A heavily armed, tough-looking young man in metal armor[1], Phil is one of the New Khans who kidnapped Chrissy outside Vault 15 in order to have "fun" with her. He is also the one that holds the key to her room.

Rescue Chrissy: With a high enough Speech skill, the Chosen One can convince him to release Chrissy; otherwise he will take this offer as a challenge and attack.

Phil appears only in Fallout 2.

Retrieved from "https://fallout.fandom.com/wiki/Phil_(Khans)?oldid=3188958"
Community content is available under CC-BY-SA unless otherwise noted.