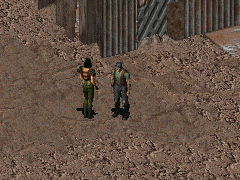 “Oh, the guy was tall, dark-haired with a little graying around the edges. He was dressed all in black leather, like that's a good idea in the desert, and carried a shotgun.”— Phil about Dogmeat's former owner

A dog, Dogmeat, has taken up residence in front of his house since his previous owner's death, which apparently occurred only days before the Vault Dweller's arrival.

Aside from appearing in Fallout itself, Phil also appears in the Fallout demo as a citizen in metal armor of Scrapheap, with the same quest as in the final game.

Retrieved from "https://fallout.fandom.com/wiki/Phil_(Junktown)?oldid=2846265"
Community content is available under CC-BY-SA unless otherwise noted.