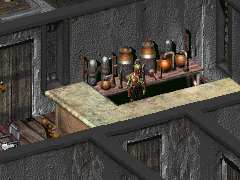 Phil is a ghoul bartender running the bar in Broken Hills.

A ghoul wearing an apron and commonly seen washing a glass,[1] Phil maintains the main bar of Broken Hills. However, like most bartenders, he has some gossip that he can tell... for a price. For some odd reason, Phil sells Nuka-Cola, Rot gut, and beer for $1 less than the usual barter price.

He is also one of the most informed characters in Broken Hills, and after buying a drink the Chosen One can ask "What's new?" to learn about anything and everything Broken Hills.

The Chosen One can tip Phil $1 or $2 every time they buy something from him, and when tipped a total of $20 he will tell the Chosen One about a secret weapons cache - that can be recovered by some dialogue - in Broken Hills.

Phil appears only in Fallout 2.

Retrieved from "https://fallout.fandom.com/wiki/Phil_(Broken_Hills)?oldid=3327720"
Community content is available under CC-BY-SA unless otherwise noted.