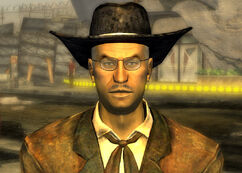 New Vegas in front of the Las Vegas Boulevard Station

“It's not my place to say much, Walter thinks this is a man's job. I swear, I won't see the day he'll get over that Heck Gunderson.”— Ethel Phebus

Pheeble Will is a side quest in Fallout: New Vegas.

Bighorner rancher Walter Phebus and his wife, Ethel, have traveled to New Vegas on the trail of a big-name rancher/robber baron named Heck Gunderson. Walter is bent on revenge after losing land to Gunderson in a shady deal.

Warning: This quest is tied to Beyond the Beef, and depending on the actions of the player character, it is possible to fail one of the two quests.

Initiate conversation with Walter Phebus near the Las Vegas Boulevard Station to find that he has trailed Heck Gunderson to the Ultra-Luxe casino. Walter tells the Courier his troubles and requests that they find out why Heck is visiting the casino. With a Barter check of 70, the player character will receive 400 caps for accepting this quest. Ethel asks to persuade her husband to let the matter go. However, accomplishing Ethel's task requires a Speech check of 75. This will end the quest and reward the player character with 375 XP.

Speak with Heck Gunderson (accompanied by a bodyguard in the Ultra-Luxe casino) to find out that he is working out a food supply deal with the White Glove Society, and that his son, Ted Gunderson, is missing. Offering to help find Ted will initiate the quest Beyond the Beef, and finishing that quest by returning Ted alive will fail this quest. However, it is possible to finish both quests by making careful options.

Retrieved from "https://fallout.fandom.com/wiki/Pheeble_Will?oldid=2946658"
Community content is available under CC-BY-SA unless otherwise noted.