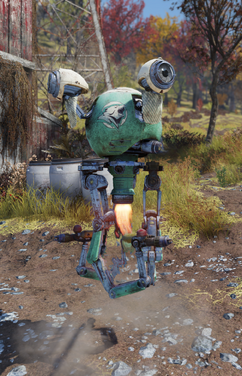 Pharmabot-JD7E is a Mister Handy operating at the Silva homestead in Appalachia in 2102.

Pharmabot-JD7E is a Mister Handy owned by Arktos Pharma and was installed for testing at the Silva homestead in April 2077. A group of local kids vandalized the robot in June of that year and were injured when it sprayed harmful chemicals on them. All of the kids eventually died, which caused a public outcry, but the company gave settlements to the associated families and considered the situation resolved.[1]

Project Beanstalk - Once the player character initiates the crop spraying sequence, Pharmabot-JD7E must be protected from the stingwings and mole rats that are flushed out from the field.

Pharmabot-JD7E appears only in Fallout 76.

Retrieved from "https://fallout.fandom.com/wiki/Pharmabot-JD7E?oldid=3305168"
Community content is available under CC-BY-SA unless otherwise noted.