The Phantom Device is a consumable item in Fallout 76.

The Phantom Device is an item used by the fictional hero Mistress of Mystery, and part of her Regalia of Mystery. Elements of the Mistress' story include the device serving as a tool for infiltration, which creates a cloud of disorienting smoke to conceal her while she makes a daring escape.[1]

Frederick Rivers built and programmed a fabricator to make recreations of the Phantom Device for the Order of Mysteries to use. He was able to create them when provided with Stealth Boys and HalluciGen gas canisters, with advice from Kent Connolly,[2] who also suggested using the then-redesigned Veil of Secrets as a gas filter for anyone who would use it, adapting it with a multilayered asbestos liner or activated charcoal.[3]

Providing the invisibility of a Stealth Boy (30 seconds), the Phantom Device generates a cloud of HalluciGen Gas-laden smoke which frenzies nearby non-robotic creatures (15 seconds and 250 range). If the player character is wearing the Eye of Ra, then the duration of both effects is doubled. With the Secret Agent perk at rank three and the Eye of Ra equipped, the invisibility lasts for four minutes.

The recipe can be obtained by listening to the holotape Order of Mysteries - The Phantom Device, then constructing it at Riverside Manor.

Super Duper can activate when crafting Phantom Devices. The plan uses a Stealth Boy, allowing one the opportunity to duplicate Stealth Boys for a few pieces of junk and a HalluciGen gas canister. 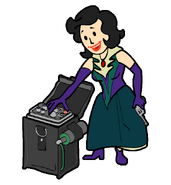 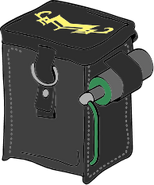