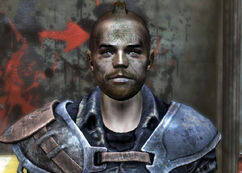 “You hit the jackpot now, wizkid. You're in Ashur's army. Now's when the hard work really starts!”

Phantom is a Pitt raider in the Pitt Uptown in the year 2277.

Although perhaps a little too excitable when around firearms, Phantom enthusiastically welcomes you to the ragtag Pitt Raider family (if you aren't massacring them all). He can share his RadAway with you once per day.[1]

Phantom is in charge of treating radiation poisoning among the raiders.

Phantom appears only in the Fallout 3 add-on The Pitt.

Retrieved from "https://fallout.fandom.com/wiki/Phantom?oldid=3369391"
Community content is available under CC-BY-SA unless otherwise noted.