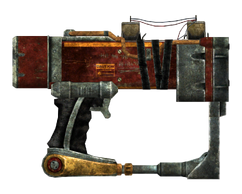 This section is transcluded from Laser pistol. To change it, please edit the transcluded page.

The AEP7 laser pistol was put into service to replace the AEP5 model.[1] With a generous battery size, tight shot grouping at range, resilience to extended use, and fairly decent damage output, it is a very good choice for a sidearm and is used extensively in this role by the Brotherhood of Steel and the Enclave in the Capital Wasteland.

As the successor to the AEP5, it boasted a redesigned focusing crystal pattern, an improved photonic focusing chamber, and selectable laser focus,[1] wavelength, pulse energy and repetition rate.[2] In addition, it was lighter and less bulky than its predecessor and was perceived as a step toward replacing the N99 10mm pistol with a laser weapon as the standard issue sidearm for military forces.[1]

The AEP7 was produced in large numbers thanks to newly developed manufacturing technologies in the United States, although logistics and supply issues prevented its wide-scale deployment.[1]

Pew Pew belonged to Allen Marks, a man infamous for hunting people for Sunset Sarsaparilla star bottle caps in the Mojave Wasteland. He broke into the Sunset Sarsaparilla headquarters prize vault not knowing it was airtight, was locked in, and thus met his demise.

The upper casing of Pew Pew is colored red, and the focus adjustment knob on the rear of the gun has a Sunset Sarsaparilla bottle cap with a crudely drawn star attached by a screw. Underneath the bottle cap are the words "Had it coming" etched into the casing, along with eight hash marks. Additional hash marks also appear along both sides and the underside of the main body of the pistol.

On top of the main body is a wooden plate with what appears to be two capacitors attached by nails, strapped on by black tape, and wired into the main body in series by a red and blue wire, hinting at its extra power output. It fires a distinct orange beam, with the flare from the muzzle being more intense than a standard laser pistol.

Pew Pew does drastically more damage than the standard laser pistol, but at the cost of 5 energy cells per shot, resulting in only two shots before reloading. It is considered an improved holdout weapon and can be concealed so long as the Courier's Sneak skill is 50 or greater.

Pew Pew can fire a total of about 395 times using standard cells, the equivalent of 198 reloads, from full condition before breaking.

“KNOWN ISSUE: If the player has one charge left in the pistol and fires, the gun will fire twice and pull the ammo for the second shot from the player's reserve, before playing the reload animation. As soon as we have a way to check ammo, I'll set this up to not fire the second shot if there's no ammo left in the gun.”— Script comment

The weapon, next to Allen