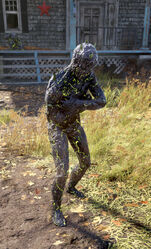 Petrified corpses are the bodies of people who have been completely consumed by the Scorched Plague. They are found throughout Appalachia in 2102.

Petrified corpses were once Scorched. At some point, they were infested by the hazardous fungus that causes the Scorched Plague, which eventually killed them and converted their bodies into a radioactive, petrified mass. Many were consumed so quickly that their corpses remain standing in the same stance and place they died in. Some Scorched may be found mid-petrification, such as in the church of Helvetia, stuck in the same state as the petrified statues. These Scorched do not crumble when shot, instead returning the fire with their own weaponry.

When interacted with, petrified corpses will crumble into pieces, releasing a small cloud of radiation (up to +8rads/s), and rarely drop loot such as nuclear waste, bottlecaps and glass bottles.

Petrified corpses are found at almost every location in Appalachia, mostly in places that were once inhabited.

Petrified corpses appear only in Fallout 76.

Retrieved from "https://fallout.fandom.com/wiki/Petrified_corpse?oldid=3139134"
Community content is available under CC-BY-SA unless otherwise noted.