Petró-Chico was the arm of Poseidon Energy operating in Mexico before the Great War.[1]

The company had locations in Veracruz, Puebla, and Hidalgo,[2] as well as a refinery along the Gulf Coast.[3] Raul Tejada tells the Courier that he went by the name "Miguel" due to finding a jumpsuit bearing the name at an old Petro-Chico refinery he took up residence in after leaving Mexico City.[3] The company's slogan was "Un Amigo de Poseidon Energy," translated as "a friend of Poseidon Energy."

Petró-Chico translates to "Oil-Boy" and Petró-Chico Boy, as seen on billboards, is mentioned by Raul as he wakes up from a nightmare about the mascot.[4]

Petró-Chico is mentioned only in Fallout: New Vegas. 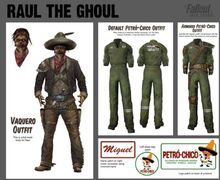