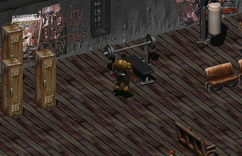 Pete in the Jungle Gym, outside the ring 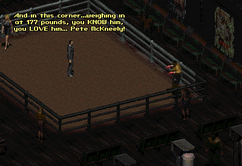 “I may only last seven seconds in the ring, but I can last TEN seconds in bed.”

Pete "The Hurricane" McKneely is a boxer in New Reno's Jungle Gym in 2241.

Despite being very muscular, Pete McKneely is still easy. Some speculate he can even be knocked out with a slice of pizza.[1] His record in the ring stands at a measly seven seconds and his stamina in bed is only better by three. Overall, he is a very weak contender.

He will be replaced by Tony Gunn if Pete is killed before starting Become a Prizefighter when talking to Stuart Little.

Pete McKneely appears only in Fallout 2.

His name is likely a reference to former heavyweight champion Peter McNeeley.

Retrieved from "https://fallout.fandom.com/wiki/Pete_McKneely?oldid=3304734"
Community content is available under CC-BY-SA unless otherwise noted.