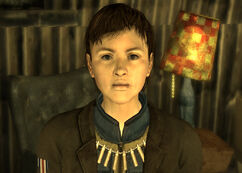 Keeper of the Story

Volare!
I Could Make You Care

“Loyal found a file somewhere on the base, with magazine articles, photographs, a map, even. It seems that a bomber, apparently the 29th of its kind, crashed in Lake Mead on July 21st, 1948. Just imagine - that's over 300 years ago! The photographs showed that it was basically intact, and the map tells us exactly where to find it. Except we haven't left Nellis in decades.”

Pete is the Keeper of the Story at the Boomer museum inside Nellis Air Force Base in 2281.

The young Pete used to be the apprentice to Don, the old Keeper of the Story until a couple months ago. His promotion to the post of current Keeper came suddenly when Don learned the hard way that whiskey and land mines do not go together well. Despite his young age, Pete takes his job seriously and treats the history of the Boomers with respect and expects others to do the same.[1]