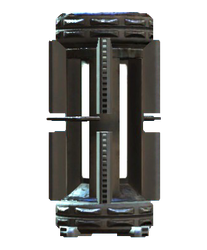 The persuasion grenade is a weapon in the Fallout 4 add-on Nuka-World.

Persuasion grenades are a unique type of grenades with only a single application: making settlers more open to suggestions. While they can be used at any time, they are effective only during quests to take over Commonwealth settlements for the Nuka-World raider gangs. Tossing one at the feet of the settlement's leader will result in an explosion of faint whitish gas and an on-screen notification that the settlers in question are now easier to persuade. Doing so effectively reduces the difficulty of the speech checks required to persuade the settlers to leave their land peacefully, provided this path of action was chosen prior to starting the mission.

Retrieved from "https://fallout.fandom.com/wiki/Persuasion_grenade?oldid=3146640"
Community content is available under CC-BY-SA unless otherwise noted.