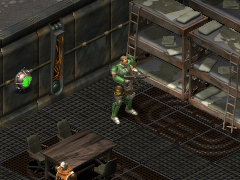 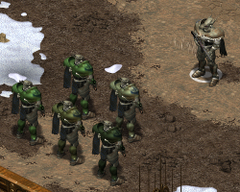 Percy in the Grail Squad

Percy is an Initiate in the Brotherhood of Steel and one of the members of the Grail Squad in 2197.

He can initially be found in Bunker Delta. Later, he becomes a member of the Grail Squad that storms the Buena Vista compound.

Percy, alongside Paladin Lancelot and the other squad members, fight against robots near the main gate of the compound, and, despite the fact that he is the only one who manages to get past the gates while the others die, he is mortally wounded. When the Warrior finds him, Percy is in a room in the facility bleeding near several scurry robots destroyed by him. Percy asks the Warrior to continue the battle, and then dies.

Percy appears only in Fallout Tactics.