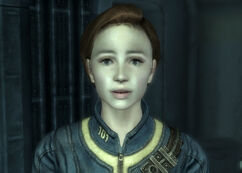 “The bugs were horrible, but my family was pretty lucky. But then my Freddie went and got caught up with those idiot rebels!”

Pepper has raised her son Freddie in the vault by herself nearly his entire life. She is a good mother and cares for Freddie, but feels helpless when confronted with his behavior. It's obvious to everyone that Butch and the Tunnel Snakes have far more influence over Freddie, and Pepper is at the end of her rope.[1]

She is the wife of Officer Herman Gomez and the mother of Freddie Gomez.

Trouble on the Homefront: She is encountered in the living quarters during the Lone Wanderer's visit.

Should the Lone Wanderer choose to destroy the vault in Trouble on the Homefront, she may be discovered dead outside.

Unlike her husband, she has a hostile attitude towards the Lone Wanderer.

Pepper Gomez appears only in Fallout 3.

Retrieved from "https://fallout.fandom.com/wiki/Pepper_Gomez?oldid=3314544"
Community content is available under CC-BY-SA unless otherwise noted.