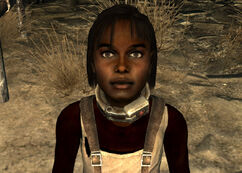 “I already told Sammy AND Squirrel I'm not going. I'm not leaving Rory! What're you gonna do, shoot me?”

Penelope, more commonly referred to as Penny, is one of several Little Lamplight children who have been captured by slavers at Paradise Falls, and who is involved in the Rescue from Paradise quest.

Penny was born in 2265. She is a 12-year-old Lamplighter who spends most of her time alone in a corner of the slave house. She laments that Rory Maclaren, whom she has grown close to, has been in isolation in the Box for a very long time and will likely die if he's not released. When not enslaved, Penny is another scavenger team member from Little Lamplight. She's adept at finding food and understanding animals in the wasteland, although this particular talent wasn't of much use when slavers stumbled across their team. At Lamplight, she spends a lot of time with her brother Joseph, who's her hero; even though she can usually take care of herself, she admires the way Joseph seems to know everything, and she tries to be like him.[1]

Penny appears only in Fallout 3.

Retrieved from "https://fallout.fandom.com/wiki/Penny_(Fallout_3)?oldid=3313592"
Community content is available under CC-BY-SA unless otherwise noted.