Pennsylvania Avenue is immediately to the east of what once was the White House. This area is a constant battle between the Brotherhood of Steel and super mutants.

Starting from the east going to the northwest, the layout of the entire district is blocked paths of rubble from collapsed buildings, destroyed streets, rocky pathways, and finally super mutants infesting the area. Immediately to the left is a Metro station called Pennsylvania Ave/Seward Sq. Metro, and continuing forward will lead you towards a large rubble blockage which has a route going to the right, where you will encounter three to four super mutants depending on your level; who will either be normal, brutes or even super mutant masters. To the left of the diner and behind the large rubble to the right will be an entrance to the sewers and if you proceed farther down the road, you will discover the Northern part of Pennsylvania Avenue; where you will find the Freedom Street station and possibly a dead Wastelander. Traveling directly south of the station will lead you quickly to the southern part of the avenue, where you will find the Penn. Ave/The Mall Metro tunnels, to the left of a destroyed car and rubble and along with being surrounded by a partially destroyed building. Once here, turn around and take a left to continue through the district where you will encounter a group of super mutants fighting with the Brotherhood of Steel on the other side of the street, where they are bunkered down. Passing the Brotherhood troops will lead you to a statue which appears to have 4 golden women each holding a large bowl. Behind them is a man-made fence blockade. To the left of the statue is a large hotel which the Brotherhood use as a base of operations, and to the side of the entrance to the hotel is the metro tunnel called Penn. Ave/Georgetown Metro.

Nearby points of Interest 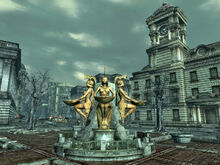 The four "golden women" holding bowls, nearby the utility
Add an image to this gallery

Retrieved from "https://fallout.fandom.com/wiki/Pennsylvania_Avenue?oldid=2210802"
Community content is available under CC-BY-SA unless otherwise noted.