Trade Secrets
Division of Wealth
All That Glitters

Unaggressive (normal)
Aggressive (All That Glitters)

Cowardly (normal)
Foolhardy (All That Glitters)

The Sophisticate
“If your new society will allow ghouls like me to join, then I'll help. Otherwise, you can beat it. I've seen plenty of folks try to save the world since things went to hell, and all of them had their problems.”

Doctor Penelope "Penny" Hornwright is a ghoul scientist in Appalachia. Before the Great War, she served as the senior operations executive at Hornwright Industrial.

After graduation, she was immediately placed at the head of Hornwright Industrial's operations department. Her first day of work was in mid-2073.[4] She pursued a ruthless policy of automation at all costs like her father. She supported her father's automation policies, stopping only when it came to actually physically hurting people, such as during the 2077 protests when she was forced to hire strikebreakers to deal with rioting miners. When her father realized that she detested the job, he commissioned a robotic solution the problem, rather than force her to toughen up.[5] However, when it came to cleaning up the damage, she showed a tenacity worthy of her father. After the Rockhound was recovered by the National Guard, she instituted 24-hour shifts, demanding that the workers accelerate the repairs to improve the company's bottom line.[6]

Penny was also responsible for perverting the original purpose of the air purifiers supplied by the Clear Skies Alliance, turning them into ash forges capable of extracting heavy minerals from the polluted air.[7][8]

When her mother succumbed to cancer in 2076,[9] Penny moved on quickly, realizing that the alternative was slowly withering away, eaten alive by the cancerous cells.[10] Despite her father unraveling and slowly succumbing to paranoia and obsessions centering on the Motherlode project, she still cared for him.

She was planning to marry Bryce Garrahan, son of the owner of Hornwright's business competitor, Garrahan Mining. The two had known each other since they were children and had fallen in love despite the divide between their wealthy families. She and Bryce were planning to tell her father about their plans but it is uncertain if they succeeded in doing so before the bombs fell.[11][12]

Some time between 2083 and 2084, Penny had a daughter. Not long after, she and her family came upon a Vault with a faulty door and negotiated with its residents to allow entrance for her daughter and the rest of her family in exchange for repairing the Vault door, knowing that she would be stuck outside. The repairs were successful, saving the Vault's residents from outside radiation in the process, but she was dosed and became a ghoul.[13][14] She adopted a habit of wandering and avoiding settlements and large groups, knowing that most tended to shoot ghouls on sight no matter whether they were feral or not. At one point, she traveled with a survivor group through Charlotte and passed herself off as human by wearing a balaclava to cover her face; however, she was eventually found out and forced out of the city.[15]

Returning to Appalachia at some point in 2103, she witnessed the construction of Foundation from afar. Penny also realized she was being chased by an unknown creature, and decided to head to her family's former estate to hide from it - not knowing it was actually the Motherlode, recognizing her senior Hornwright Industrial credentials.[15]

Penny may be contacted by a Vault Dweller from Vault 76, who was looking for assistance in using the Motherlode to enter Vault 79 and claim the treasure it contained. In exchange for her help, Penny asked for a safe place to live in the settlement of Foundation.[16]

Since Penny's arrival at Foundation, she has become friends with Jen. The two have been working on the Liberator that the Vault Dwellers brought them, with Jen hoping to turn it into a soothing personal assistant.[17] Penny has also been teaching Davie Taylor how to hack robots.[18]

Her presence is not appreciated by Maggie Williams due to the history between their families; Maggie keeps an eye on her and mentions that Penny's face is like a metaphor for the ugliness of the Hornwright family showing up on the outside.[19]

Penelope Hornwright appears only in Fallout 76, introduced in the Wastelanders update. Prior to the update, she was only mentioned in the game. 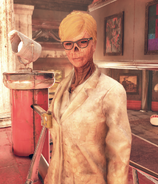 Penny in her estate

In A Golden Future