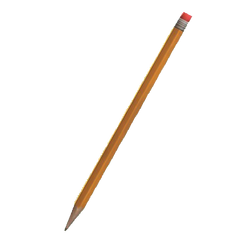 The pencil is a junk item in Fallout 4.

An orange pencil with a pink eraser. It is identical in size to the reporter's pencil, However it is hexagonal and orange instead of cylindrical and brown.

The pencil can be broken down into its individual components for use in crafting:

The pencil can also be used to craft endangerol syringes at a chemistry stations.

Pencils can often be found in the following circumstances:

Some pencils can also be found in the following fixed locations:

The "lead" in real pencils is made with graphite, which was originally believed to be a variant of lead and was historically referred to as "plumbago" (Latin: lead ore) or "black lead." Pencils have never been made with actual lead.

Retrieved from "https://fallout.fandom.com/wiki/Pencil_(Fallout_4)?oldid=3269598"
Community content is available under CC-BY-SA unless otherwise noted.