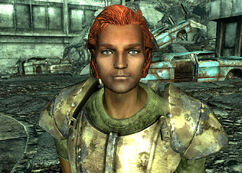 “Wow... that's... that's easy. Now at least I can shoot back at those mutant bastards. Are you ready?”

Initiate Pek is an Initiate in the Brotherhood of Steel in the year 2277.

Initiate Pek was born in 2261 and is young (16), gung-ho, and inexperienced. He is in love with Sarah Lyons, who finds him secretly amusing but is professionally annoyed with his behavior, and has requested that he patrol a different part of the Metro area. Pek is always the one charging into danger first, celebrating victory prematurely, and possibly getting blown away by foes he never saw coming.[1]

During a training exercise in Falls Church, Pek, Paladin Hoss, and an unnamed paladin were separated by a super mutant attack. Pek became trapped in an office building while Hoss and a paladin were fighting nearby, and the Lone Wanderer must help them during the quest The Lost Initiate.

Initiate Pek appears only in Fallout 3.

Retrieved from "https://fallout.fandom.com/wiki/Pek?oldid=3268734"
Community content is available under CC-BY-SA unless otherwise noted.