None
“What you have done for us is a miracle, child. You have fulfilled the only dreams we ever had outside our walls. You are a trusted friend of us all. If there is ever a way for us to help you, child, tell me and I will make it so.”

Pearl is the leader of the Boomers living at the Nellis Air Force Base in 2281.

Born as a Vault dweller of Vault 34, on the outskirts of New Vegas, Pearl was part of the rebellious faction of the dwellers that decided to abandon its confines and take their chances with the wasteland around 2230. Setting out with them on the cusp of adulthood, Pearl helped in settling Nellis and observed how the tribe turned the base into a prosperous settlement that kept foes at bay with their batteries of recovered howitzers. Pearl is one of the few Boomers old enough to remember the outside world before the tribe went into self-imposed seclusion. Unlike her juniors, she has observed the signs of a changing wasteland outside the AFB's gates with increasing unease. Neon lights of the reforged Vegas, patrolling robots, soldiers of the NCR Army, all indicate that the time for change has come: Either Boomers will open up to the world, or they will slowly become its victim.[1]

Since 2276, roughly the time NCR presence in the wasteland spiked on the eve of Operation Sunburst and the First Battle of Hoover Dam, Pearl has been looking to the gates, waiting for an outsider to brave the rain of shells and reach Nellis. The Courier becomes the first to make it through the barrage and with it, a chance for Pearl to demonstrate the value of opening to the world and the worth of outsiders.[2] 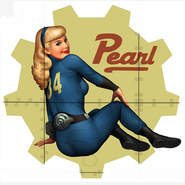 The pinup featured on the restored bomber