9 (during Growing Up Fast)
16 (during Future Imperfect) (unverified)

Paul Hannon Jr. or Paul Hannon II[Non-canon 1] is a resident of Vault 101. He is younger than the Lone Wanderer.[1] Paul is a member of the Tunnel Snakes in 2277.

The other Tunnel Snakes sometimes tease him because of his dad being the chief of security in Vault 101. But this also gives him a certain cachet among his friends, though.[Non-canon 1]

On July 13, 2268, Paul attends the Lone Wanderer's tenth birthday party. In a conversation with the Lone Wanderer, Paul expresses his disappointment that he did not have a Pip-Boy 3000 yet.[1] If he is engaged in a conversation, Paul will sheepishly apologize for his friends' harassment,[2] and they will start teasing him about "having a crush" on you (if the player character is a female), or about him being your "friend" (if the player character is male), which will then cause him to call you a "dorkface" so he could keep up his appeal with the other boys.[3] Later, at the party, Paul ponders possible names for their gang with his two friends.

On August 3, 2274, Paul and his friends are harassing Amata Almodovar. The Lone Wanderer can side with Amata, side with the Tunnel Snakes, or leave Amata with the Tunnel Snakes. During the factional crisis in Vault 101, Freddie Gomez informs the Lone Wanderer that Paul Hannon died from severe wounds, sustained during the radroach attack, and would have survived if their had been a doctor in the vault.[4]

He is the only child of Paul Hannon Sr. and Vikki Hannon. Later, Paul Hannon is informed that his answers in the G.O.A.T. exam determines his career as an engineer. Paul is relieved with this news. Butch DeLoria, Freddie Gomez, and Wally Mack are his friends and fellow gang members. 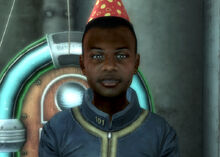 Paul, during Growing Up Fast

Paul, Wally Mack and Butch hallucination in the Vault 106