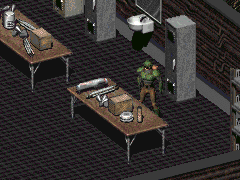 Paul is a knight in the Brotherhood of Steel, stationed in Lost Hills in 2161.

He is the head of energy weapons development for the Brotherhood, having used Vree's design to create the latest model of laser pistol. He is in the maintenance lab with Kyle on the third floor of the bunker.

Once Vree mentions having designed a laser pistol, the player can visit Paul and examine the pistol, but cannot receive it unless cleared by Talus or Mathia.

Paul appears only in Fallout.

Retrieved from "https://fallout.fandom.com/wiki/Paul_(Fallout)?oldid=3139930"
Community content is available under CC-BY-SA unless otherwise noted.