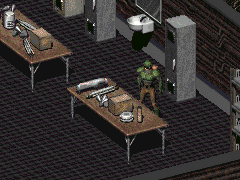 Paul is a knight[1] in the Brotherhood of Steel, stationed in Lost Hills in 2161.

Paul is the Brotherhood's top energy weapons specialist and has worked extensively with both laser and plasma weapons in the course of his career. He built and re-built practically every energy weapon conceivable and works closely with Brotherhood Scribes to make new designs a reality.[2] His latest achievement is rebuilding a design created by Vree. He shares the workshop with Kyle, though he is decidedly more serious about his work.

Once Vree mentions having designed a laser pistol, the Vault Dweller can visit Paul and examine the pistol, but cannot receive it unless cleared by Talus or Mathia.

Paul appears only in Fallout.

Retrieved from "https://fallout.fandom.com/wiki/Paul_(Fallout)?oldid=3405053"
Community content is available under CC-BY-SA unless otherwise noted.