Betty Jean Ward
“Well, now that you're out of bed with your new arm, I suppose it's my job to ask you some questions. My name's Patty and I'm the security officer for what's left of this facility. Who are you?”

Patty, a vault dweller, was the security officer of Vault-Tec's secret facility, the Secret Vault in 2208.

A survivor of the local civil war of the Secret Vault, Patty took the job of keeping the residents safe from the monsters and robots after their old security officer Blake rebelled and deserted because he found the ethics of the research to be immoral.[1] She feels that their stranded people can not survive much longer inside.[2] Patty is unaware that Attis and his army of super mutants intend to breach the vault.[3]

Patty helped the Initiate to recover after their battle with Attis, helping them obtain a new left arm. She learned about the approaching super mutant attack from the Initiate and asked them to help her to shut down an auxiliary vent, so the people in the vault could escape through it to the wastes.[4]

She became a new leader of the community of those who survived the chaos by hiding in the garden area after the chief scientist Dubois is killed. However, she went missing after Mary felt Patty had been acting strange.

While her plan to open the vent succeeded, Patty didn't leave the vault with the others. She remained to make sure the Vault-Tec research would not become a plague to humanity and plans to use a nuclear warhead specially designed in case of an emergency.[5] The emergency situation begins when Attis uses modified FEV strain on himself and transforms into a giant, regenerative blob that grows with each second. She tried to make it to the warhead terminal, but was caught by Attis' tentacles. He began to grow inside of her, slowly eating her. The Initiate found her, and she asked them to use the terminal, so the vault and Attis would be destroyed. She then asks the Initiate to mercy kill her, sparing her from a terrible death.[6]

She is also a playable character after completing Chapter One. She is very similar to Nadia, though she does have some extra advantages.

There is some easily missable dialog; if the Initiate does not protect the technician(s) and keeps getting them killed and returns to Patty, Patty will be annoyed, saying technicians don't grow on trees. If the player keeps it up, Patty will call the Initiate an idiot, asking, "Are you using these technicians as body armor or what?!? All right, I've got another one ready to go - you're supposed to be protecting him! Try to keep that in mind this time... bloody idiot."

Patty appears only in Fallout: Brotherhood of Steel.

Patty in the inventory screen 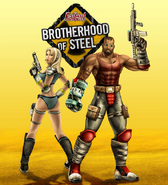 Patty and Cyrus on the soundtrack cover