Patrons are customers at the Wayward in Appalachia.

Patrons start to appear at the bar once it has officially opened, following the completion of The Elusive Crane. Three patrons can be found in the game: two men and one woman, who sit and wander around the bar. The man at the counter is a musician from Nashville who occasionally plays the acoustic guitar on the bar stage. The woman is a refugee from D.C. who is doing odd jobs for Duchess in exchange for food and clothing. The man sitting under the stairs is a former soldier-turned-slaver who is scoping out the bar for potential victims.

Patrons appear only in Fallout 76, introduced in the Wastelanders update. 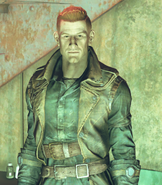