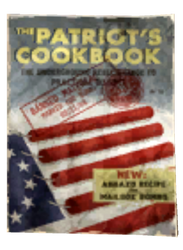 The Patriot's Cookbook is a skill magazine in Fallout: New Vegas.

On the front is a red stamp administered by the pre-War Federal Bureau of Investigation, which claims that it is "banned material" and "to be burned" on February 11th, 2069. Despite this, the magazine remained in wide circulation across the southwestern United States, being found across the Mojave and beyond.

The magazine offers articles on creating explosive devices for a variety of purposes, such as Abraxo based bombs and mailbox bombs. Given the banned nature of the material, it is hinted to be intended for those with anarchistic or communistic inclinations.

Reading this magazine raises the Explosives skill by 10 points (20 points with the Comprehension perk) for 60 seconds (180 seconds with Retention).

The name of the book is inspired by the book The Anarchist Cookbook, which featured recipes for homemade explosives.

Retrieved from "https://fallout.fandom.com/wiki/Patriot%27s_Cookbook?oldid=3258516"
Community content is available under CC-BY-SA unless otherwise noted.