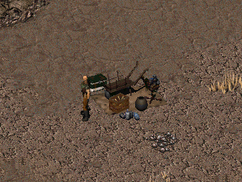 “I wander from place to place, making a living with music and a little bit of tinkering work.”

Patrick the Celt is a character who appears in the Singer random encounter in Fallout.

He can be considered a fellow adventurer, as he mentions helping Junktown with their lights and Shady Sands with their wells, similar to what the Vault Dweller does. He's the descendant of an Americanized Celtic family with a strong desire to keep his "ethnic heritage" alive. To this end, he collects clothing, food, stories, songs, and histories as he travels the wastes. He knows the Celtic song Na Gheala Mbeadh. Patrick is determined to preserve his history.

Patrick appears only in a random encounter in Fallout.

Jess Heinig is a designer who wrote Patrick's dialogue, which appeared in Fallout Bible 9.

Retrieved from "https://fallout.fandom.com/wiki/Patrick_the_Celt?oldid=3269833"
Community content is available under CC-BY-SA unless otherwise noted.