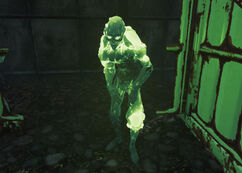 Patrick Gibbons is a bloated glowing one in 2287, found at Cranberry Island Bog.

Patrick Gibbons was a farmer on Cranberry Island before the Great War, showing signs of dementia after his wife died.

When the bombs fell, the members of the Gibbons family who were at home at the time locked themselves in their bunker, where they became trapped after the machinery controlling the door was broken. He was locked in together with his daughter Victoria, his son-in-law Frederick, and his grandson Steven. He can be found and fought if the player character fixes the machinery and opens the bunker door.

Missing from the bunker is his granddaughter Eliza Gibbons who was off to a Halloween party when the bombs fell. Nathaniel Gibbons, his other grandson, went missing before the bombs fell, though it was not uncommon for him to be gone.[1]

Patrick Gibbons appears only in the Fallout 4 add-on Far Harbor.

Retrieved from "https://fallout.fandom.com/wiki/Patrick_Gibbons?oldid=3395074"
Community content is available under CC-BY-SA unless otherwise noted.