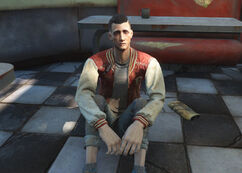 Patrick is a drug addict in the Drumlin Diner in 2287.

Patrick is addicted to jet and has accumulated a debt to Wolfgang who has been providing Patrick with the drug.

Patrick, if alive, will just sit on the ground and remain there throughout the rest of the game. Usually, the only time he will ever get up is to fight against Wolfgang. However, if the Sole Survivor has Dogmeat as a companion, he will occasionally get up and even walk outside the diner to comment about the dog, then go back to sitting on the floor inside.

Patrick appears only in Fallout 4.

Retrieved from "https://fallout.fandom.com/wiki/Patrick_(Fallout_4)?oldid=3122967"
Community content is available under CC-BY-SA unless otherwise noted.