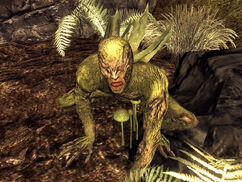 The origin of this creature comes from a human patient that mutated when the B. mordicana fungus, later used in Vault 22, infected them. They were considered a failed experiment by the Big MT scientists, and the body was left alone. However, when the scientists returned to the laboratory, the body of Patient Zero had disappeared and now can be found at the X-22 botanical garden.

This section is transcluded from spore carrier. To change it, please edit the transcluded page.

Spore carriers are quick and use melee attacks. Spore carriers share some characteristics with the trogs from the Fallout 3 add-on The Pitt. If they are not killed quickly, they explode and deal large amounts of damage, breaking limbs and giving a large dose of radiation. When they are hiding in vegetation, they are hard to spot and will not appear on the Courier's compass, nor be targeted via V.A.T.S. until they move.

Spore carriers are also known for sneaking up on their victim. However, their health meter will become visible if they are injured by an area-of-effect weapon, like a flamer or grenade, immediately revealing their presence.

Upon detecting an intruder, the spore carrier will raise themselves out of the large patch of vegetation where they hide and will let off a growl in a similar manner to that of a feral ghoul, but with greater ferocity.

While a spore carrier is getting up or sleeping, attackers in sneak mode who manually attack the spore carrier will get a critical.

The term "Patient Zero" was originally used to describe the individual initially believed responsible for introducing the virus responsible for AIDS to the United States, although the designation was later repudiated. It has since been genericised to refer to the first described instance or "index case" of any medical condition, in which case it is used in decapitalized form.[1]

Retrieved from "https://fallout.fandom.com/wiki/Patient_Zero?oldid=3148429"
Community content is available under CC-BY-SA unless otherwise noted.