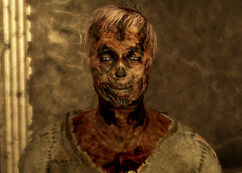 Patchwork, or "Patches," is a ghoul who resides in the city of Underworld in 2277.

Patchwork is Underworld's town drunk. He's in pretty rough shape, even for a ghoul. He's always losing limbs that Doctor Barrows has to find and sew back on. Patchwork is friendly enough to humans, especially if softened up with a bottle of booze. Winthrop looks out for Patchwork but has never been able to convince him to stop drinking.[1]

Patchwork randomly wanders around the promenade inside the center area of Underworld. He may enter The Ninth Circle to obtain more alcohol. He and Quinn appear to be good friends, as in a non-player character to non-player character conversation Patchwork asks Quinn if he "brought anything back" for him.

Patchwork will tell you to "talk to Ahzrukhal" even if Ahzrukhal is already dead.

Patchwork appears only in Fallout 3.

Retrieved from "https://fallout.fandom.com/wiki/Patchwork?oldid=3245605"
Community content is available under CC-BY-SA unless otherwise noted.