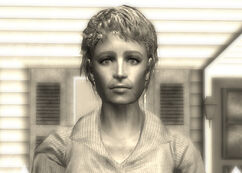 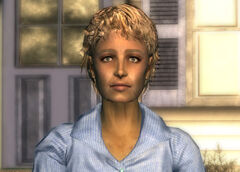 “What? Oh, sweetie. Maybe you should just run along and play.”

Pat Neusbaum is one of the inhabitants of Vault 112 and part of the Tranquility Lane virtual reality simulation, still alive in 2277.

Wife of George and mother of Little Timmy, Pat is a shrinking violet who's more content to give her son platitudes of encouragement, compared to the stern talking-to that George favors. She's worried about her dear little pumpkin: Timmy, not George.[1]

Like the other inhabitants of Vault 112, she is trapped in the Tranquility Lane simulation by Stanislaus Braun.

Pat is the wife of George Neusbaum and the mother of Timmy Neusbaum.

Tranquility Lane: Pat Neusbaum is one of the residents the Lone Wanderer will have to kill if one elects to do all of Betty's tasks.

Pat Neusbaum appears only in Fallout 3.

Retrieved from "https://fallout.fandom.com/wiki/Pat_Neusbaum?oldid=3186186"
Community content is available under CC-BY-SA unless otherwise noted.