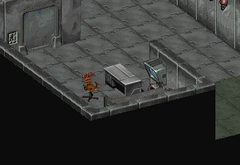 In this desk you'll find the paper
“This is three pieces of a single page that, when assembled, reveal three passwords. The text reads: 1. Physics Password KSLJKJ: Ken-Lee-97313, 2. Chemistry Password TIUASPO- Lo-Shi-S12908, 3. Biology Password INTLVR- Dnky-Pnch-98790”
“A sheet of folded paper with the word "TCHAIKOVSKY" written on it.”

Two versions of password papers are quest items in Fallout 2.

These are two paper note quest items in Fallout 2. They both depict a type of password. Despite being of the same names, they are two different items, with different Prototype ids. It can also be noted that while the first has no weight and no value, the second has a weight of one unit and a value of five.

The first appears to be a form of cryptic password, with three separate sheets (torn papers), and all three would be needed to complete the password. The second is simply a piece of paper with a Russian surname on it.

The first unlocks the Shi main database in the Steel Palace, while the second unlocks the first force field in the Sierra Army Depot.

The password "TCHAIKOVSKY" is actually a surname of a Russian composer, Pyotr Ilyich Tchaikovsky.