Parsons State Insane Asylum is a location in the Commonwealth in 2287.

Built by the Cabot family and formerly administered by their son Jack as superintendent, Parsons State Insane Asylum housed and cared for Boston-area residents who were deemed mentally ill or insane. Subterranean rooms were constructed in the facility's basement to house the most difficult cases, including Lorenzo Cabot.[1] Following an 1894 archaeological expedition in the Middle East to find the lost city of Ubar, Lorenzo was institutionalized at the asylum for life[2] for his and his family's safety. The expedition had uncovered a mysterious artifact that bestowed upon him supernatural powers, but also made him mentally unstable, resulting in his admittance to the institution.[3]

In the years following the Great War, the Cabots hired a security team to protect Lorenzo and his secrets from exploitation by outsiders.

The grounds are fairly mundane, notable only for a few mercenaries roaming around. A road leading in from the northeast passes by the main entrance on the south side of the asylum, the only way into the building. A wall surrounds the grounds, but some sections have crumbled over the years. Around the back of the asylum is a large outdoor area where patients could get some fresh air.

The interior of the asylum is not accessible until the start of the quest The Secret of Cabot House. The main entrance opens to an admissions area in the administration section, with two initially locked doors: a key-locked door to the east, and a door chained on the other side to the southeast. The open hallway to the northeast contains a couple wrecked offices and ends in a staircase leading upstairs. At the end of the upstairs hallway (along which is an Advanced-locked closet with an Expert-locked wall safe) is a supply room with a broken wall, allowing access to a staircase back to the first floor.

Back on the first floor, to the southwest is Jack Cabot's main office, which contains a currently unusable elevator connected to the basement and a terminal Jack will use to unlock the door east of the main entrance. The hallway to the northwest continues to the chained door southeast of the main entrance. Through the now unlocked door to the east is a large high-ceilinged courtyard with a central fountain. Scaffolding leads up to a hole in the wall to the east providing access to a therapy room. Through the door on the east wall of the room is the asylum section.

The entrance to the asylum section opens to a wide corridor heading west. An Advanced-locked door to the south leads to a room with several beds and five clapping cymbal monkeys. Across the corridor to the north is a cafeteria and kitchen area. The collapsed floor leads down to a common room with a few offices to the south. Through another hole in the wall to the east, a narrow space between the walls allows for a descent to the lowest levels of the asylum. The next hallway is lined with several small cells each containing only a bed, a dresser or shelves, and a toilet, likely used for the more unstable patients. A hole in the floor at the end of the hallway to the west leads to a therapy room, three more solitary cells, and a small side room with an Advanced-locked floor safe. The hallway ends to the west at a utility elevator that descends to the basement.

The basement leads through an excavated area to the control room. A security corridor operated by Jack finally leads to Lorenzo Cabot's personal prison cell, which is protected by four generators and an Abremalin field. Inside is a bed, a chair, a curio, some tables, and Lorenzo himself. An elevator on the west side of the control room returns to Jack's office in the administration section.

Asylum cell with pieces of chalk arranged to spell "HELP ME" 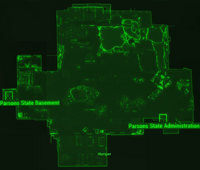 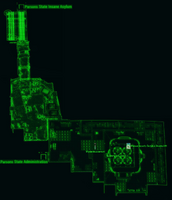