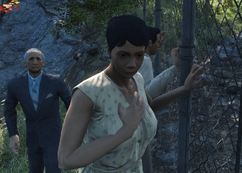 Mrs. Parker was a resident of Sanctuary Hills in 2077 prior to the Great War. Post-War, she has become a feral ghoul by 2287.

Mrs. Parker was once a neighbor of the Sole Survivor. When the effects of the Great War hit Massachusetts, she and her husband were one of many in the panicked rush to Vault 111; they were denied entry by Vault-Tec staff and armed soldiers. Realizing they were unable to secure a place, and being threatened by a minigun wielding soldier after demanding entry, they were left helpless outside the gates to the vault. Despair eventually set in and they would swiftly find themselves in the midst of nuclear devastation. They survived but underwent ghoulification and ultimately became feral. 210 years later she still roams the Commonwealth and Boston alongside her husband.

Mrs. Parker may reappear multiple times, even simultaneously, after being killed.

Mrs. Parker appears only in Fallout 4.

Former neighbors in random encounter
Add an image to this gallery
Retrieved from "https://fallout.fandom.com/wiki/Parker_(female)?oldid=3295773"
Community content is available under CC-BY-SA unless otherwise noted.