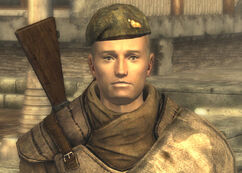 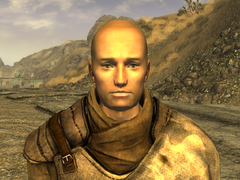 Parker without his hat

“Captain Parker. I'm in charge of this camp.”

Captain Parker is an NCR officer who helps run the Aerotech Office Park in 2281.

As the head of the refugee camp, it is up to Captain Parker and Doctor Bert Gunnarsson to ensure that people down on their luck have somewhere to go to. Although he is seemingly perpetually short on people and supplies, he tries his best to make the park livable.[1] The biggest problems in recent times include disappearances among the refugees and exploitation of people under his care by unscrupulous folks like Keith.[2]

The uphill struggle makes him more than a little high-strung. Parker is particularly haunted by the memory of a blonde girl with a stuffed bear. She did not speak much, but he remembered her when she and her family suddenly disappeared.[3][4] As a result, while he tries to keep it together, there is a rage lurking beneath the calm exterior. Parker is usually in control of his anger but particularly vile criminals can set it off,[5] and one of the most reliable ways to trigger it is to mention his ex-wife.[6]

Killing Captain Parker in response to his cold-blooded murder of Keith still results in a negative reaction with the NCR.

“[What can you tell me about the missing people?] They never seemed to have much in common - that's why I didn't notice it sooner. Young folks, old folks, men, women... all disappearing. I remember a family with a little blonde girl. She... never talked much, but she always carried this little stuffed teddy bear.”

Retrieved from "https://fallout.fandom.com/wiki/Parker_(Fallout:_New_Vegas)?oldid=3281661"
Community content is available under CC-BY-SA unless otherwise noted.