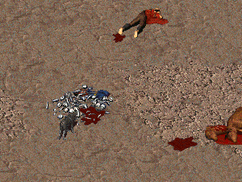 “You see a ragged looking dog that could expire at any moment.”— In-game description

The pariah dog is a special joinable NPC in Fallout 2 found in the special encounter "A lone surviving dog."

He'll be standing in the middle of an area scattered with corpses, and will go with the Chosen One over the Party Limit if failing a Luck check. His joining gives the Jinxed trait and drops Luck to 1 (or 2 for the gifted).

In battle, the pariah dog does nothing helpful and usually just runs away and over the edge of the screen.

The only way to remove the dog from the party and stop it from taking up one of the NPC slots is to kill it.

Contrary to its skeletal look, the pariah dog has a very high Hit Points stat of 750, which means it can withstand great punishment before dying.

The pariah dog appears in Fallout 2 and is mentioned in the Fallout Bible.

In real life, a pariah dog refers to a free-ranging dog that occupies an ecological niche; such dogs are often feral, and sometimes strays.

Zero damage instant death critical hits (possible with the Better Criticals perk) that cause the death of any NPC with scripts that would normally activate upon death, will not activate those scripts (this bug is not limited to the dog). Therefore, it is possible for the dog to die, and all the ill effects of its presence in the party, including occupying a party slot, to remain. The perk Living Anatomy makes zero damage impossible; Bonus Ranged Damage and Bonus HtH Damage probably work the same way.

Retrieved from "https://fallout.fandom.com/wiki/Pariah_dog?oldid=3223846"
Community content is available under CC-BY-SA unless otherwise noted.