Rescue from Paradise
Strictly Business
Those!
Economics of Violence
Strictly Profitable
The Kid-Kidnapper

“We are all escaped slaves. I need your solemn promise not to betray us to Paradise Falls or the Slavers.”— Hannibal Hamlin

Paradise Falls, formerly the Paradise Falls Shopping Center, is a strip style shopping mall, and, by 2277, the main haven for all slaver activity in the Capital Wasteland, with business ties to further slave markets in the Pitt. It is a constant source of fear for many of the wasteland's denizens.

Paradise Falls' former slaver leaders include Penelope Chase and Harmon Jurley. Harmon Jurley was the leader of Paradise Falls around 2250.[1] By 2277, Paradise Falls is led by Eulogy Jones, who regulates the purchase and selling of slaves, after he personally killed the former leader.[2] The slavers get paid on commission, based on the number of wastelanders they bring in,[3] and according to Herbert "Daring" Dashwood, the slavers have become more organized in the last twenty years and "[buy] and [sell] anything with a pulse."[4] Fortunately for the denizens of the Capital Wasteland, slave collars are a rarity, which makes the slavers' job much more difficult.[5]

Paradise Falls is home to a group of battle-hardened slavers. The inhabitants of Paradise Falls are infamous for their incursions into Big Town, and on rare occasions, Little Lamplight. The slavers are also known to seize random wastelanders, and the town is frequently mentioned on the Herbert Dashwood program on Galaxy News Radio.[6][7][8]

Paradise Falls can be found by traveling almost directly north from Vault 101, Arefu, or Vault 106. It is located to the west of Minefield, and is recognizable from a distance by its most prominent landmark, a gigantic statue of the Tall Boy mascot holding an ice cream cone.[9]

The compound is a rectangular strip mall-style compound, protected by walls of stacked derelict vehicles. On the northwest side of the compound, a dirt path lined with makeshift fencing and barbed wire leads to the entrance. The mouth of the path is guarded by Grouse, who sits just outside the compound. The gate is a section of a bus, complete with its passenger door, set within the makeshift wall. Within the wall is the pre-War archway and sign for the shopping center. Above the entrance is the severed arm of the Tall Boy mascot. It has since had spikes driven into it and was attached to a hydraulic gate so it can be lowered or raised for defense. However, the gate will not be lowered to block entry, even if the exterior guards are killed.

Immediately through the entrance is a defensive barrier with "Stow Your Piece," and an image of a revolver with a circle and slash through it painted on it. The barrier has skulls on spikes over the top and a window in it. Debris from the mall's destroyed buildings covers a large section of the compound. The few buildings that are largely intact have been converted to suit the slavers' needs. On the east side of the entrance, around the barrier, is the path to the weapons shop, Lock and Load. It is inside a large building with signage reading "Restaurant" on the roof. The path is bordered by a makeshift wall of debris, rubble, makeshift barriers and gates. Behind this is a sentry post built around the Paradise Falls starburst stylized signpost. Directly to the west of the entrance are the slaver barracks, built out of the two-story liquor store, and Cutter's clinic, built within the store called "Velmas."

Alongside the clinic entrance is another set of defensive barriers built from derelict vehicles and makeshift barricades, and at the east end of this barrier is a generator. Just past the generator is the stairway up to the sentry post. Southeast through the opening is Eulogy's pad, a former cinema, and to the west of the pad is a makeshift open-air bar and grill built into the ruins of a RobCo parts store.[10] Outside the theatre entrance, is an open fire with a whole roasting brahmin on a cooking spit, with a nearby pool table.

Another makeshift wall opens in front of Eulogy's pad, which leads to the southernmost section. The slave and brahmin pens run along the southern edge, built within what was once a clothing store. In front of the pens, next to the barrier wall, is "The Box," a Pulowski Preservation shelter that has been refitted into a cruel holding cell. An inaccessible Freddy Fear's House of Scares costume shop shares the pen's east wall. A former coffee shop sharing the pen's west wall houses the compound's toilets.

Paradise Falls appears only in Fallout 3. It is mentioned in the Fallout 4 Creation Club content "Capital Wasteland Mercenaries."[11] 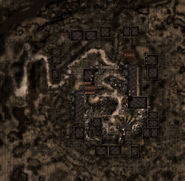 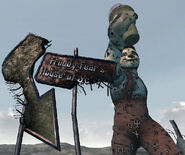 Sammy, Penny and Squirrel freed and waiting at the drainage grate

Line up of the main characters 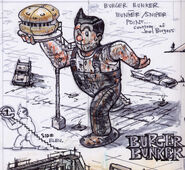 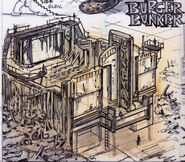 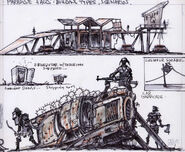 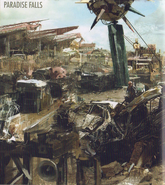