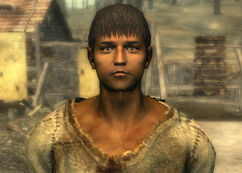 “I'll bet you're here to rape and pillage us aren't you? Aren't you?!”

Pappy is a pessimistic inhabitant of Big Town in the year 2277.

Now in his mid-20s, Pappy is the old-timer in town. He's trying to hold the fabric of the settlement together, but it is coming apart at the seams. They've lost their only doctor, and Pappy is becoming increasingly pessimistic. He's drawn the defenses in to the center of town so there's only one entrance and fewer weak spots. He is concerned and careful but isn't holding out much hope for survival.[1]

Pappy claims to have come from Little Lamplight with his girlfriend Bittercup and the others hoping to find Big Town, a nice town with plenty of food and protection. Bittercup broke up with him when they found Big Town to be a shoddy bunch of houses and junk organized into a fortress, that was constantly under attack by slavers and super mutants.

Pappy appears only in Fallout 3.

Retrieved from "https://fallout.fandom.com/wiki/Pappy?oldid=3260175"
Community content is available under CC-BY-SA unless otherwise noted.