Chieftain of the Great Khans

Oh My Papa
For the Republic, Part 2
Why Can't We Be Friends?
We Are Legion 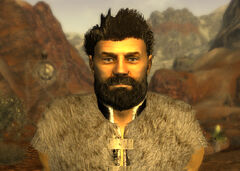 Papa Khan without his helmet

“Well, then, let me educate you: I am the chief of the Great Khans - the Khan of Khans, if you like. This is my tribe and these are my people.”

Papa Khan is the leader of the Great Khans living in Red Rock Canyon in 2281.

Papa Khan is the Great Khans' patriarch and chieftain.[1] Once a disciple of Darion in the New Khans, he led those who survived the destruction of the New Khans in California to the Mojave Wasteland. He then continued the tradition of the Khans, raiding many of the surrounding tribes, and soon became a major force in the Mojave while creating an image of ruthlessness and ferocity that couldn’t be matched.

In the not too distant future, Mr. House recruited the surrounding tribes, giving them money, weapons, and supplies. He then drove the Khans out of New Vegas. Realizing Mr. House was too strong, Papa Khan decided the risk was too great for an assault and the benefits too few for a powerless rundown city when plenty of caravans and settlements were still open for raiding. The Great Khans then withdrew toward Bitter Springs as their new semi-permanent settlement. Then when their old enemy, the New California Republic, expanded in the Mojave, Papa and his Khans naturally lashed out at the settlers and soldiers that began to pour in, entirely predictable considering the history of hatred between the two factions. Large war parties of Khans began attacking and pillaging NCR settlements and outposts. When Mr. House signed a treaty with the NCR and restored the city’s power, NCR then had free hands to deal harshly with the Khans, culminating in the massacre of Bitter Springs. Papa Khan was leading a war party against an NCR outpost at that time, so he feels heavy guilt and responsibility for not being there when his people needed him most. His grudge against NCR to this day is a major driving force behind the alliance between the Great Khans and Caesar's Legion.

He can be found inside the Great Khan longhouse in Red Rock Canyon. The Longhouse is the only concrete building in the village and is located to the right as one enters the Canyon. At night, he can be found sleeping behind the locked door.